It was 2005. I was ten years old. I had just remembered the preamble to the constitution and was preparing break a school record in the Greenwood Joggers (my grade school’s version of watching hamsters run in a circle, but I was good).
Tiger’s win this last weekend, led to much reminiscing. What was I doing last time Tiger slipped into the Green Jacket? I was entering the prepubescent years (yes, I was a little slow to puberty). The glory days of two square and running in circles to win a pass to Adventure Land. Not a care in the world.
But in 2005 Tiger Woods, was golf. Phil existed as someone’s dad, Jordan Spieth is my age… and no one else on tour made a 10 year old want to watch golf.
This exact same feeling happened this weekend. So I just wanted highlight some notable events that took place in 2005.
I think we can all agree, Tiger’s Master’s win was probably the best thing to happen in 2005 (except maybe Madagascar). I cannot imagine 2019 having any higher moments then what happened on Sunday. See you all in 2020… Repeat?
-G
Posted March 20, 2019 Uncategorized

The winner will have a great certificate for work! And the loser is in a big TBD state…

Come join the Charlie & Me group in ESPN Tournament Challenge and see if your bracket beats the rest. http://fantasy.espn.com/tournament-challenge-bracket/2019/en/sharer?redirect=tcmen%3A%2F%2Fx-callback-url%2FshowGroup%3FgroupID%3D2676755&groupID=2676755

Is stubbornness just another word for lazy?  Over the past couple of years I have learned that I can be a really stubborn person, but I wouldn’t classify myself as lazy.  But the more I started to think about it the more I began to draw some similarities between the two.  Is being stubborn just another way of saying that I am too lazy to try another option?  Often times when I get aches and pains or headaches people say to take an ibuprofen but I almost always decline and just tough it out.  I have began to believe that that is just me being a bit stubborn and deciding to ride out the pain.  But is it really just me being to lazy to take a few pills??  There are many other examples but this one caught my attention today and I have thinking about it ever sense.

Welcome to the inner workings of my brain

Sick days in the real world

I took my first sick day for work today, and it is way different then taking a sick day from school growing up.  First off, you don’t have to convince your parents that you really are sick enough to warrant staying home.  Instead you have to convince yourself that you are too sick to get your work done and that you will be able to manage missing work. For me it was definitely easier to talk to my parents then convince myself this was the right move.  Once i made the decision to stay home I went back to bed, but once I woke back up I soon realized that I have no food in the house and no Mom to take care of me.  It just isn’t the same, so hear is a reminder to call your parents no matter how far away you are from them and say thank you for always taking care of you when you weren’t able to take care of yourself. 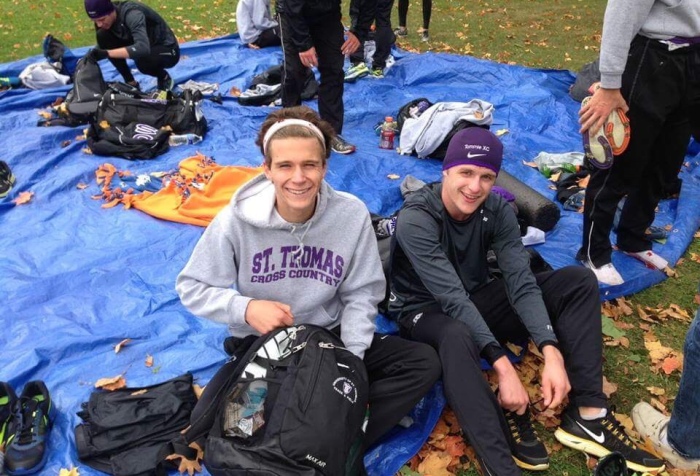 Most of us are enjoying our Sunday scaries, but some good people are preparing themselves for one of the best things to ever happen on a Monday morning. The Boston marathon. Fifty percent of this podcast is preparing to run, and we are wishing him the best!

Best wishes to our boy, Charlie! Don’t be the slowest guy out there!

Round 1 of Charlie and me Masters

First round is in the books.  Grant and and I weren’t paired together for the first couple of rounds of this years masters. I just completed my round.  I had trouble getting off the tea but my iron play and putter came to my rescue.  I hit 17 greens in regulation  and had 22 putts. Ended up carding a 58.  I’m happy with how I played and am looking forward to Friday’s round.  I’m curious to see how Grant fairs in his first round and what kind of battle we will have for the weekend.

Charlie and me are looking for an artist to create a new logo for the podcast. If you think you have what it takes, reach out to us with submissions or inquiries. All inquiries will be taken seriously.

Please help, I can’t look at Charlie’s face as our logo for much longer!

Reason for Charlie and Me

Charlie and I know that it seems like any more anyone with a MacBook and an opinion can create a podcast. We do not just want to be a mainstream podcast. We come together once a week to record these seemingly pointless conversations because we believe in the value of staying connected to our friends and family.
As many of you know, we both moved away from all of our college friends after graduation. We both have family and friends spread out all over the nation. We believe in staying in contact with as many of them as want to put up with our dumb questions and teasing. Further, it gives me an excuse to call Charlie about three times a week.
Moving forward, we hope to grow in our content and execution. We appreciate feedback and look forward to making this podcast as tuned to our listeners as possible. So if you have an opinion, don’t keep it yourself. Tell us, we might listen.
-Grant
Posted March 26, 2018 Uncategorized

The Charlie and me bracket challenge is in full flight with the winner to still be decided.   However, we don’t care about winners.  We are all about not being the worst of the group.  Fortunately or unfortunately depending who you are, the loser has been determined.  It does seem fitting that one us lost, but I am sure glad it isn’t me.  Sorry Grant, but looks like you will be retaking the ACT.

That being said this does feel like a perfect opportunity to place some bets on what his score will be.  What if loser if this bet has to pay for the test?? I am sure we will discuss this further on future podcasts as we figure out the details on when and where he takes the exam.

Charlie and I have decided to create a bracket challenge last minute, at the request of a loyal follower of the podcast.

There is no award for first place, but.. there is an award for last place. The worst bracket has to be at the mercy of the group (i.e. retake the ACT, stand on a corner and solicit relationship advice, etc). We are open to suggestions and would like all who want to sign up to comment their best idea on this post.

We look forward to your responses!

A great conversation with Sam Karlson. Look into the episodes tab and find the most recent link to this podcast.

March Madness is ahead look for more information of teams to come!

Welcome to the internet

Growth is upon us. Charlie and I had a very difficult time with our distribution of our podcasts through mass texting efforts and have now moved into the modern day with our own website.

We plan on publishing podcasts every week on Tuesdays. So check back frequently for the most updated 30 minute show.

We look forward to sharing this with our friends.